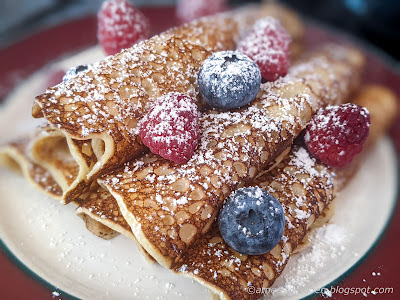 Is it a crepe, a pancake, an appetizer, a breakfast item, all of the above?  Yes.  Mlyntzi are a beloved Ukrainian thin pancake and enjoyed by many names and cultures across Eastern Europe.

"A blintz, blintze or blin (plural: blintzes or blini; cf. Lithuanian: Blynai, blynai; Russian: блин blin, блины (pl.); Polish: bliny; Ukrainian: млинці, mlyntsi; Yiddish: בלינצע blintze) is a thin pancake. It is somewhat similar to a crêpe with main difference being the fact that yeast is always used in blini, but not used in crêpes."

Traditionally yeast risen though today they are often chemically leavened and much more thin and crepe-like than the historic versions.  But that also leaves more room for interpretation and enjoyment!  There are endless options for toppings and fillings, both savory and sweet.  A very traditional topping is sour cream or creme fraiche and caviar or lox.  I am not a caviar or a lox fan.  I like hot smoked salmon, not cold.  I heard one family describe the joy of mlyntzi filled with chicken and mushrooms, which sounds delicious.  I grew up with blintzes as a rare treat.  Not sure where that came from as our town was Scandinavian in origin and Swedish pancakes were the big thing.  Actually though, the thin and lacy pattern of a Swedish pancake is very similar to the way my mlyntzi turned out!

Incidentally, when any kind of filling (cottage cheese, farmer cheese, stewed potato, apples etc.) is rolled or enveloped into a mlynets (singular) and then lightly re-fried, sauteed or baked , it is called nalysnyk.  I did try for a cottage cheese blintz style packet and the filling wanted to run out the lovely little holes in the pancake.  Still tasty, but they were best as I chose to make most of them, rolled up with a lovely citrus curd and sprinkled with fresh berries and a touch of powdered sugar.  A popular version, the citrus curd and I see why.  You can also find unorthodox versions like nutella and strawberry now as well.  Only the imagination limits the possibilities.  Our host kitchen gave us two versions, one sourdough and one commercial yeast.  I made the yeast version which turned out much more crepe-like than the sourdough evidently, though I did add a dollop of starter to mine for flavor.  At least one other Babe made both versions and noted the sourdough was a thicker batter.  So for a more easily handheld appetizer style mlyntzi or blini, try the sourdough option or reduce the milk in the yeast version.  For a stackable, rollable, foldable option, go with the yeast version.  They will both be delicious.  I love a crepe-like pancake. 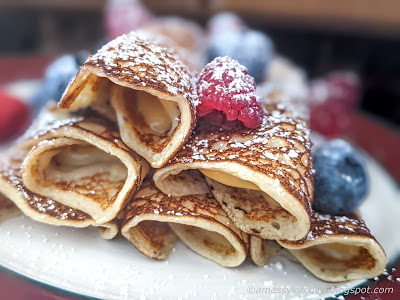 We would love to see your variations and topping ideas this month and share how it turned out! New recipes are posted every month on the 16th. Check out our Facebook group to see the participants' baking results during that time.  If you would like to post your results with a Buddy badge on a blog, let us know in the comments or on the Facebook page.

In a small bowl, whisk yeast into body temperature water. Set aside briefly.

In a medium size bowl, whisk together sugar, all but ¼ cup of milk (or milk powder and water), and the buckwheat flour. Make sure the mixture is smooth and retains no lumps. Whisk in the yeast mixture. Cover and allow to rise in a warm place for 1 hour.

Melt butter and allow to cool a little before whisking into the egg yolk and yogurt. Stir this mixture into the buckwheat mixture, along with the remaining milk, salt, and all-purpose flour. Again, make sure there are no lumps; you want this mixture to be very smooth. Cover and allow to rise in a warm place for 2 hours.  I decided to forgo separating the egg yolk and white and just whisked in the whole egg, skipping the whipping/folding step.

Whisk the egg white until stiff but not dry, then fold the fluffy egg white into the batter along with the pinch of baking soda. Allow the batter to rest for 30 minutes more. If the batter seems thick, carefully add warm milk a very little at a time. Emilie Raffa says that "The texture should be thick, bubbly, and pourable".  My batter was thin and bubbly, a perfect crepe batter, but not thick as noted.

Heat a cast-iron pan. Spray or flick some cold water drops on the pan. If the water beads, the pan is at the right temperature. (If it lies there, the pan is too cool; if it steams up immediately, the pan is too hot.) Brush the pan with butter. Use about 2 tablespoons of the batter for each blin/mlynets. Darra Goldstein adds: "taking it from the top of the batter each time so that the rest doesn't fall". Swirl the pan to make a pancake that is about 5 inches in diameter.  My batter gave consistent results whether from the top or bottom, still providing the requisite holes on top.

"Cook the blin or mlynets for just a few minutes, until bubbles appear on the surface, then turn and cook the other side until faintly browned. The blini are best served hot from the pan, but if they must be held, pile them in a deep dish, brushing each one with butter, and cover the top of the dish with a linen towel." - Darra Goldstein 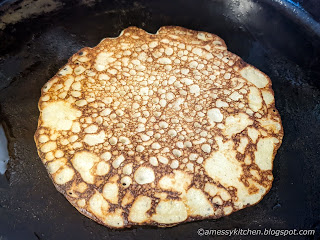 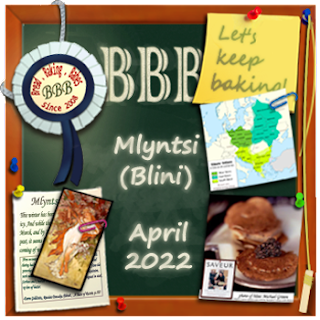 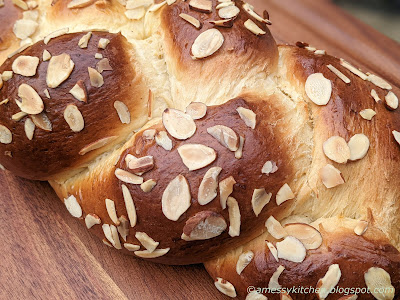 Our BreadBakers theme for this April is Easter breads!  There are so many traditional Easter breads around the world, and some that make the rounds at other holidays by changing the shape as well.  Tsoureki is one of those, a delightfully fluffy and flavorful brioche bread from Greece and also well known in Turkey and Armenia. 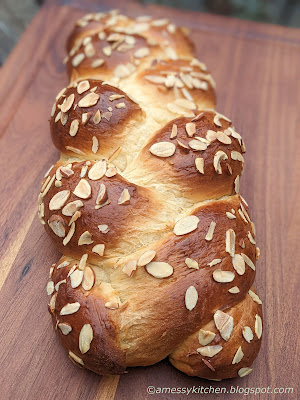 Sometime the bread has red dyed hard cooked eggs baked into it though this is a plain version.  The soft and stringy textured loaf is flavored with two unique spices, mastic resin and mahlab.  The mahlab I have used before, a lovely spice with the floral and sweet flavor of cherry and almond.  The resin is a subtle aroma that reminds me of juniper.  It comes from the mastic tree and is also called the tears of Chios.  A fascinating product with many culinary applications.  It should be stored in the refrigerator.  I tried chewing a couple pearls in the traditional fashion as a sort of gum and found it enjoyable. The combination of mastic and mahlab is lovely and characterizes an authentic Tsoureki.  (I recommend the whole seed for mahlab to preserve the flavor longer.  When ground, it should be kept in the freezer or it will lose flavor.)  Once baked, there is a subtle and uniquely appealing aroma to the bread.  If you cannot find or do not wish to order mastic, ground anise may be substituted, but it won't be the same.  Similarly, almond extract and a pinch of cinnamon or cardamom can replace the mahlab.  I will keep my mastic in the freezer and look for other recipes that use it now that I have seen the possibilities! 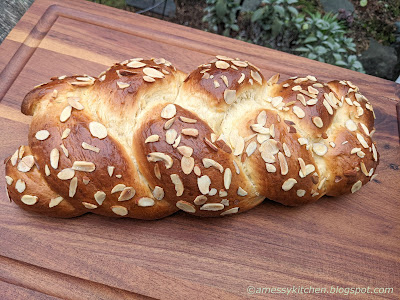 Tsoureki takes time to rise properly, so plan ahead when making the dough.  Don't add flour, the dough is perfectly workable after rising.  Shape the ropes gently to maintain the characteristic texture.  This bread is perfectly wonderful when fresh and just buttered, and toasts wonderfully but browns quickly so watch to make sure it does not burn.  This is also a bread that does not want to be over baked so watch to make sure it does not do so and dry out.  I found that pieces of tsoureki toasted, buttered, and sprinkled with jaggery were fantastic.  I imagine cinnamon or cardamom sugar sprinkle would be amazing as well.  Actually, since this is not an overwhelmingly sweet bread, I am keen on trying it as a french toast as well though the signature stringiness to the crumb may make that a challenge.  Oh my, it would make phenomenal bread pudding... 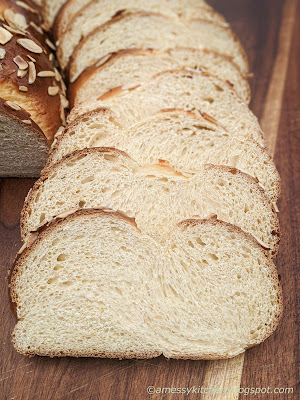 In a bowl, activate the yeast by stirring into the lukewarm water with a pinch of sugar.  Cover and set aside for about 6-7 minutes until the yeast is bubbly.  Water that is too warm will kill the yeast and too cold will significantly extend the rise time.  Around body temperature should do.

Use a pestle or a spice grinder to grind the mastic and mahlab/mahlepi, along with a pinch of the sugar and set aside. Do not add any more mastic than the recipe calls for or it will leave a slightly bitter taste to the bread.  The amount is small and subtle, but enough for the distinctive aroma and flavor.

In a saucepan over low heat, stir together the butter, sugar and milk until the sugar is dissolved and the butter is melted. Allow to cool to lukewarm.  No more than 110ºF.

Pour the butter mixture in a large bowl and whisk in the eggs.

In the bowl of a stand mixer, add the flour, salt, the ground mastic and mahlepi, orange zest and the butter-egg mixture, and the activated yeast. Using the dough hook mix on low speed until the ingredients start to combine and then on medium-high speed for about 15 minutes, until the dough doesn’t stick to the sides of the bowl while mixing.   The dough will be soft and somewhat sticky.  Do not add more flour, it is meant to be a soft dough.

Cover and place in a warm area, until the dough is at least doubled in size (about 3-4 hours). If the kitchen is cold, preheat the oven for 30 seconds, turn it off and place the bowl inside with the light on.

Gently deflate the dough and cut in 3 equal portions. Take one piece of the dough (do not flour the working surface!) and roll it a little with your hands. Hold the rope up from the edges and give a little bounce to stretch the dough into a rope. This technique helps form the characteristic stringy texture.

Braid the three pieces together and transfer on a large baking tray layered with parchment paper.  Let the braid rise for about 1 more hour at room temperature or in the oven, until it puffs up and almost doubles in size.

In a small bowl whisk together the egg and 1 tbsp water with a fork.  Brush the top of the loaf with the egg mixture, taking care not to deflate it, then garnish with almond slivers.  Bake in preheated oven at 325ºF for about 30-40 minutes, until nicely browned and fluffy.  Cover with foil or parchment if it is getting too brown too quickly, and continue baking. 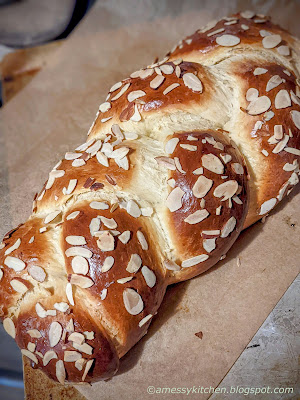 Let the bread cool down completely and store in a bread bag to keep it from drying out. Store for up to 3 days at room temperature or up to a couple of months in the freezer. 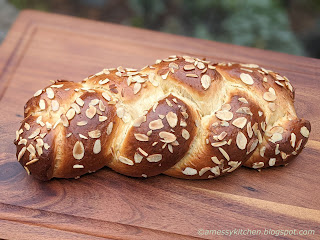 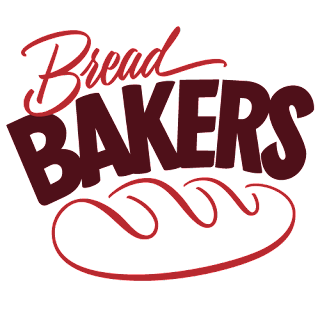 #BreadBakers is a group of bread loving bakers who get together once a month to bake bread with a common ingredient or theme. Follow our Pinterest board right here. Links are also updated each month on this home page.

We take turns hosting each month and choosing the theme/ingredient. 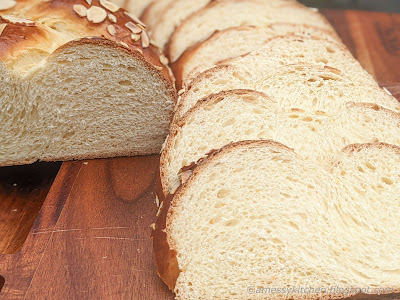