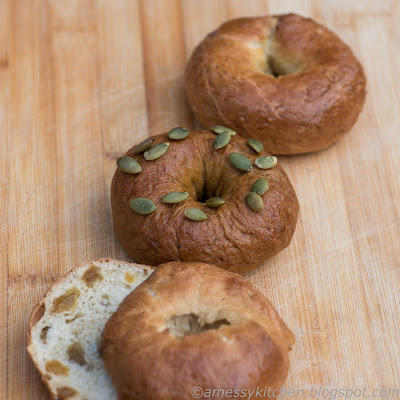 I kind of went crazy on this challenge and made four different flavors!  Pumpernickel, Oatmeal Orange, Cinnamon Raisin, and Spiced Pumpkin.  Originally I was only going to do one loaf, because I thought a bagel loaf sounded interesting, but after seeing the optional flavor changes and realizing I could cut down the recipe to one egg for each flavor...  Well, I went there.  Turned out seven bagels per flavor, which was perfect.  We got to test one and send the rest to work where they were very happily gobbled up.  It was helpful to be able to share, which is why I chose the traditional bagel shape rather than the loaf.  (My youngest actually claimed all the oatmeal bagels, they didn't make it to work.  And since that first batch was in an oven I deemed too hot, I'm thrilled she loved them so much!) And since we have not been having potatoes on hand recently, I fiddled around with that aspect too. 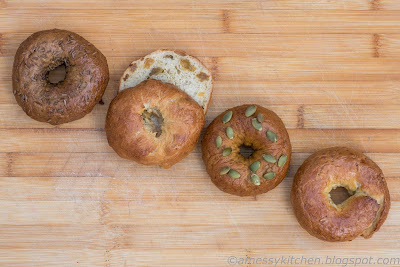 Why do we use potato water?  For the starch.  It adds chewiness and moisture and enhances keeping quality.  A good all around dough conditioner.  I have potato starch...  So what did I do?  I looked up starch in russet potatoes and tried to figure out how much might go into the potato water during cooking.  Depends on how long you cook of course, but I decided to try 15g and it was quite viscous.  Much more so than regular potato water, but I went with it.  I just simmered the starch and water slurry just until the starch went translucent and thickened.  Worked beautifully.  The freshly baked bagels were light and soft but still chewy like a bagel should be.  They firmed up upon cooling to proper bagel-ness, but not too hard!  They actually remind me of a bialy since they are softer than the traditional stiff bagel dough.

I also fiddled with the boiling times because I remembered the last time we made bagels.  That was definitely for that recipe and not this one.  I think these bagels get the majority of their rise during the boil, though mine never sank at all and I did 90 seconds on each side to even it out.  I also tried doing the traditional shape where you roll the dough into a snake and seal the ends together.  That worked well for the other recipe but not this one, with the longer time in the water.  So I went for the "poke a hole in the middle and stretch it out" method.  Definitely worked better! 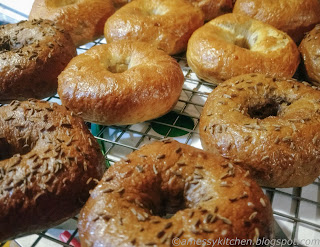 We would love for you to join in as a buddy baker this month! Try a new flavor of bagel or even a bagel loaf!  (I still think that sounds cool.)  You don't have to have a blog to participate, a picture will do. Just send a picture or your post of your finished bagels or loaf to Bake My Day! at bakemyday {at} gmail {dot} com by Dec. 1st and be sure to put BBBuddy in the subject line.  You will receive a Bread Baking Buddy graphic to keep or add to your post, and be included in our Buddy round up at the end of the month.  New recipes are posted every month on the 16th. Check out our Facebook group to see the participants' baking results during that time. 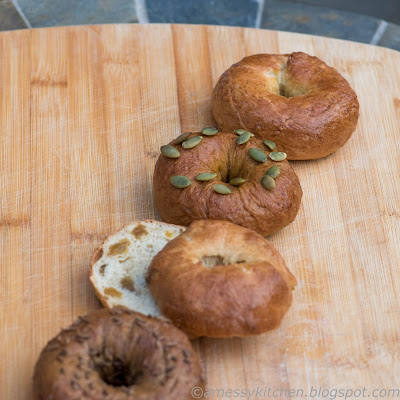 Peel potatoes and cut into large chunks, boil in 2½ cups water until tender. Drain but reserve 2 cups of the potato water! Let cool until lukewarm. Use potato for other purposes.

In a large bowl using a whisk or the work bowl of a heavy duty electric mixer fitted with the paddle attachment combine yeast, 1½ tbs sugar, 1½ tbs salt and 2 cups of the flour.  Add potato water and oil.  Beat on medium speed for 2 minutes.  Add 1 cup of the flour and the eggs and beat again for 2 minutes.  Add the remaining flour, ½ cup at a time until a soft dough forms that just clears the side of the bowl.  Switch to a wooden spoon when necessary if mixing by hand.  (Because I was doing quarter recipes, I just combined everything except the oil, mixed until shaggy, then mixed in the oil and kneaded for 5 minutes with the dough hook.)

Place dough in a large container, cover with plastic wrap and let rise until doubled in bulk 1-1½ hours.

To form bagels: gently deflate the dough. Turn out onto a lightly floured surface and divide into quarters.  Then each quarter into 6-8 equal portions.  (I weighed each ¼ batch of dough and divided into 7 bagels.)  Shape each portion into a smooth round.  Flatten with your palm and poke a floured finger through the middle of the ball.  Stretch the hole with your finger to make it about 1 inch in diameter.  Spin the dough around your finger.  (Like a bagel hula hoop!)  The hole will shrink slightly when you stop.   Repeat with all bagels.

They will need no further rise at this point.

Twenty minutes before baking, preheat the oven to 425°F (220°C).  (This ended up being too hot for my first batch and I got better results at 375°F (190°C).  Line two baking sheets with parchment. Meanwhile bring a large pot (3-4 Qt) of water to a boil.  Add 2tbs of salt or sugar to the boiling water depending on the flavor you want the crust to have.  (I used sugar and a tsp of malted barley syrup.)  Reduce the heat to maintain a gentle low boil.

With a slotted spatula, lower 3-4 bagels at a time into the gently boiling water.  They will drop to the bottom and then rise to the surface.  (Mine didn't sink, there's a lot of happy yeast in these!)  As they come to the surface, turn each bagel and boil it 3 minutes on the other side.  This goes very quickly, if you are making the entire batch of bagels, use a second pot of boiling water.  (One benefit of a quarter batch, only needed one pot!)

Remove the bagels from the boiling water with a slotted spoon and place each 1" apart on the prepared baking sheets.  When all the bagels have been boiled, brush with the glaze and sprinkle with seeds if desired.  Place bagels in the oven and bake for 25-30 minutes, or until deep golden.  Transfer immediately to a cooling rack.

To form and bake a bagel loaf: Turn the risen dough out onto a lightly floured surface and divide into 3 equal portions. Form into rectangular loaves and place into three greased 9x5" loaf pans. Cover loosely with plastic wrap and let rise at room temperature until just level with the tops of the pans, (these loaves will rise a lot in the oven) about 40 minutes.

Brush the tops with egg glaze and using kitchen shears, carefully snip the top of the dough about ½” deep at 2” intervals down the center of the loaf. Bake in the center of the preheated oven until crusty, golden brown and the top sounds hollow when tapped with your finger, 40-45 minutes. Transfer the loaves to a cooling rack. Cool completely before slicing. 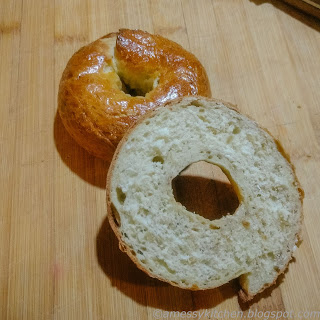 # Cinnamon Raisin:  Increase the sugar to ¼ cup.  Add 1 tbsp ground cinnamon, 1 tsp ground mace or nutmeg and ½ tsp ground cardamom with the flour in the initial mixing.  Add 1½ cups golden or dark raisins during mixing.  This dough may be formed into a loaf and topped with sesame seeds. 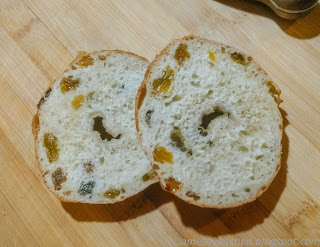 # Pumpernickel Bagels:  Substitute 2 cups medium or dark rye flour for an equal portion of the unbleached flour.  (I used light rye that I had on hand).  Add ¼ cup molasses, 1 tbsp unsweetened cocoa and 1 tbsp powdered instant coffee.  (I used espresso powder, in half the amount.)  Glaze the tops and sprinkle with caraway seeds. 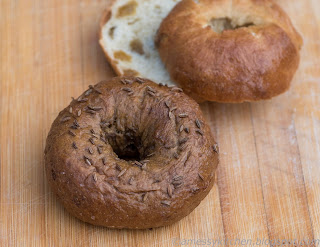 (My own flavor addition was spiced pumpkin with pepitas used on top after glazing.)   Substitute 1 cup of pumpkin puree for 1 cup of the water, increase sugar to 1/4-1/3 cup, and add 1 tbsp cinnamon, 1 tsp nutmeg, 1 tsp allspice, and 1 tsp cloves during the initial mixing.  Top with pepitas after glazing.  (Optional.) 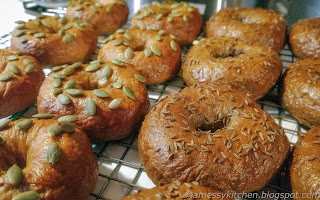 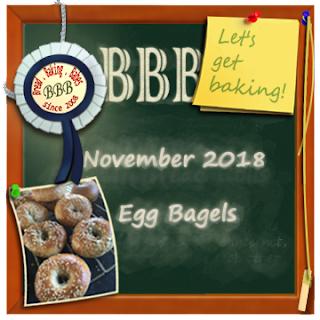 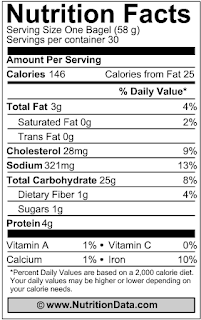