The BBB make Coconut Rolls for the weekend or a holiday 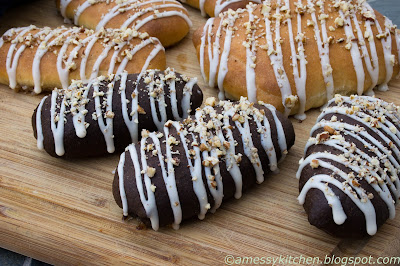 Something simple from our host kitchen this month: Coconut Rolls.  Sweet, simple little buns with slightly exotic flavor.  She asked only that we keep them coconut rolls, since Babes do tend to tweak recipes, myself included.  And I did tweak a little.  I was fairly faithful to the original recipe, save that I added pecans to the filling as well and thickened with cream and an egg instead of corn starch.  Bad corn.  Go away, pesky allergy.  Since that basically made my filling almost identical to that of a German Chocolate Cake, I thought it would be appropriate to try making some of the dough chocolate.  So I looked around for yeasted chocolate bread recipes to check the ratios for cocoa powder, and got baking.  The results were wonderful and my kitchen smelled awesome!  Youngest daughter particularly loved the chocolate buns, while eldest liked the original plain dough best.  They were both delightful.  The dough isn't a sweet dough, so these turn out like a nice, tender, yeast Danish, rich but not too sweet.  Yes, I did take the liberty of adding just a touch of glaze to them.  Not too much, mind you.  Just enough to be pretty.  They are rather plain Jane otherwise. 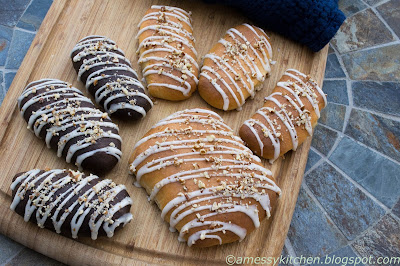 I'm pretty sure these will freeze and reheat well, I may be making more in the future for special breakfast options.  Yum.  We'd love for you to bake along with us as a buddy and this is a nice and easy recipe to earn a badge with.  You have until the 29th to make the rolls and pop over to the host kitchen at Notitievanlien to submit a post and/or your picture.  You get a nifty buddy "badge" to add to your post or brag about as well.  If you want to try the chocolate version like I did, the ratio I used was 2 scant tbsp for a half batch, so a scant ¼ cup for the whole batch.  I was using Double Dutch dark cocoa from King Arthur.  And I added back about one tbsp water to the chocolate batch.

Stir together water, sugar, yeast, and melted butter in a bowl or stand mixer and let sit for a few minutes.  Add the flour and salt.  Knead the dough until smooth and elastic.  It may be sticky at first, but kneading will take care of that.  Cover the dough and leave to rise for about 1½ hours or until doubled in volume.

Meanwhile, make the filling.  When using dried coconut (80g), it needs to soak in a bowl with boiling water for 10-15 minutes.  Mix the cornstarch and sugar in a separate bowl before adding it to the coconut.  Melt the butter in a saucepan, add the coconut-sugar mixture and keep it on low heat until it thickens, a few minutes.  Stir frequently to avoid burning.  Take off the heat and leave to cool.  Store in the fridge.

Directions for my filling:  Whisk together egg, cream and vanilla in a saucepan.  Add sugar, salt and butter.  Cook over medium heat until thickened and light golden, stirring constantly.  It will take 5-10 minutes.  Remove from heat.  Add coconut and pecans, allow to cool.  Store in fridge for longer term storage.

About 30 minutes before assembling the roll, take the filling out of the fridge.  Stir in the remaining 2 Tbsp of coconut.   The filling may be stiff if it is still chilled, but it will soften with stirring.  Set aside filling.

Divide the dough in two parts. Roll the first piece out into a rectangle of 30x16 cm. (12x6 in)  Cut it lengthwise in two equal parts, so you have two long thin strips. Place a quarter of the filling evenly over the middle of the strip.  The filling should be fairly dry, don’t place wet filling on the dough.  (I left spaces between the filling so I could more easily seal the buns once I cut them apart.  That's a lot of filling but I was able to fold over the long edge and seal.) 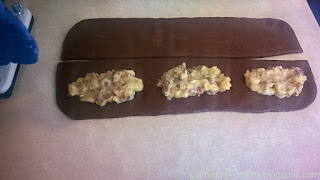 Flip over one long side of the dough over the filling, then flip over the other side. The two sides should slightly overlap.  Close the seam by pinching the dough together.  (I kind of just folded it all over in half and sealed at the edges.  You do need to be careful about getting a good seal and not using too much filling.  If you look at my chocolate buns with a good seal and my regular buns when I either didn't seal well enough or used too much filling... yeah.  They leak.  But it makes nice little florentine crisps to eat!  The original filling is stiffer and will not be quite so prone to leaking.) 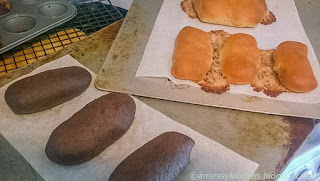 Turn the roll seam side down. Cut the roll into three equal parts. Push the filling back a little, so you can close the cut sides, so the filling is not visible and can’t leak out. (Leave a space, it's easier.)

I did try making a larger one with one of the divided rectangles and folding over like a letter, you can see it in the top pictures.  Also rolled one up cinnamon roll style, sliced, and baked them off in a mini muffin tin. 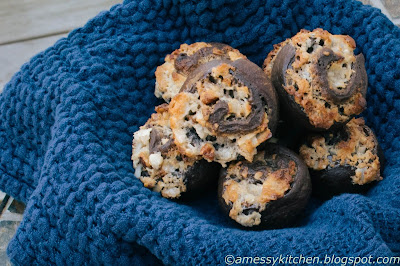 Repeat filling and shaping with the next strip, then with the remaining piece of dough.  Place the rolls, 4 cm apart, on parchment lined baking sheets.  Cover them with plastic wrap and leave to rise for 35-45 minutes. They are ready when a slight indentation remains when gently pressing with a finger.

Bake the rolls for about 15-18 minutes until they are golden brown.  (If you bake on two sheets, switch their places after 8 minutes for more even baking.)

Let the rolls cool on a wire rack. Eat them warm or at room temperature. 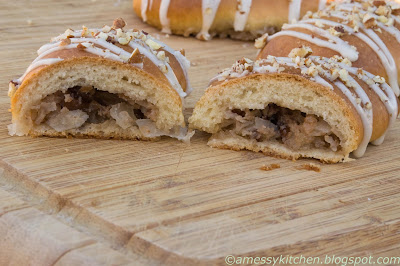 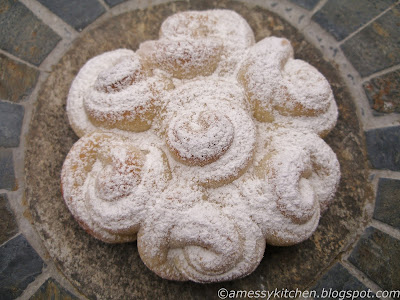 I've seen this recipe floating around on Pinterest, posted by quite a few different websites.  I'm fairly certain that the original was posted in or near Russia by a baker named Dobraya Feya.  I tracked down the site and had it roughly translated, so I want to give her link the full credit it deserves!  I made a light spelt version of her beautiful rolls and my eldest has been begging me to make more of them.  They make a rich, brioche like dough.  Not very sweet, but very satisfying. 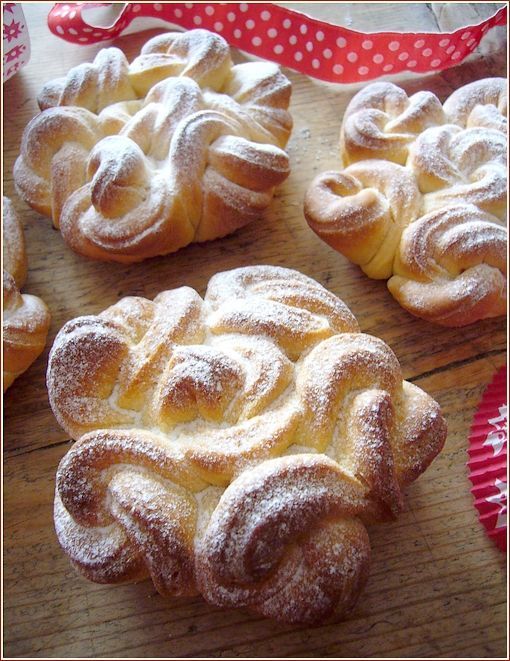 Above is the picture from the original post and Pinterest, and they are beautifully formed.  Spelt rises a bit more exuberantly so mine weren't quite so defined. 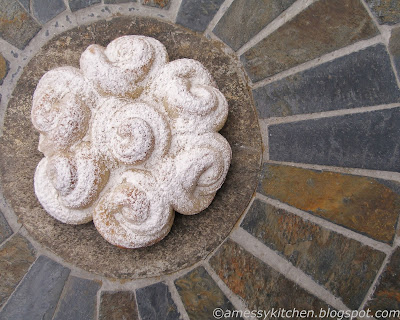 They froze nicely, but the richness of the dough means they won't last more than a day or so at room temperature.  I made a few minis in a standard muffin liner, but not actually in the tin, so they could spread a bit. 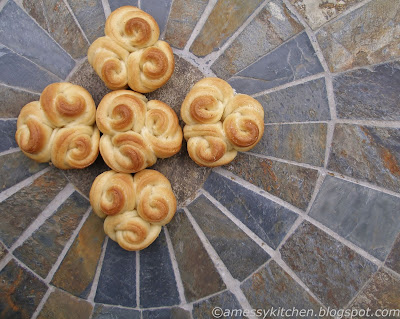 I will have to make another batch soon to keep in the freezer, because these will be nice for grabbing while heading out the door to school or whatever.  R just ate them plain, without even butter on them and was very happy.  I liked them with a little spread of butter. 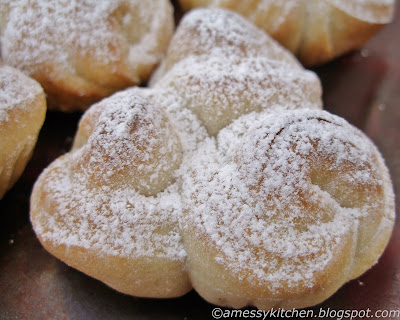 Here is the original recipe with my adaptations marked in blue.  They really are lovely little rolls, the dough is easy to work with and only the shaping takes a bit of extra time.

Airy Lace Rolls
350 g flour (I used light spelt flour)
80 g soft butter (I used salted butter and added ¼ tsp salt since the original called for salt but did not list it)
2 egg yolks (I used 1 whole egg)
140 grams of warm milk (110g if using spelt flour)
3 tbsp sugar + 1 tsp, divided
1 packet of vanilla sugar (9g) (I used a pinch of vanilla powder and an extra 1 tbsp sugar)
10 grams of yeast (This is equivalent to 3½ tsp dry yeast which I reduced to 3 tsp)

Whole milk to glaze the rolls before baking

In a bowl, combine the milk, 1 tsp sugar, and yeast.  Cover and let stand for 5 minutes to activate the yeast.  In a stand mixer, combine the yeast mixture, flour, salt and egg.  Combine with a spoon until the dough is raggedy and hard to stir.  Add the softened butter in pieces and knead with dough hook.  Knead for 10 minutes.  (Only 5-7 minutes for spelt.)  Cover and let rest in a warm area for 1-2 hours until the dough has doubled in size.

To form the rolls:

Punch down the dough and divide in half.  Working with one piece at a time, roll out the dough to between 3/16" and ¼" thickness.  Cut out circles of about 5cm diameter (that's about 2 inches).  I found a little yogurt jar that had approximately the correct diameter, or maybe closer to 2½", and used that. 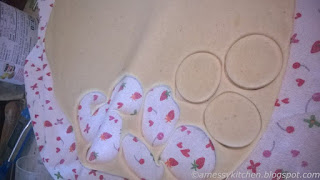 Line up three circles of dough, overlapping the edges slightly and pressing together. 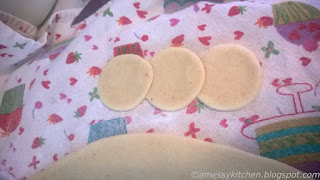 Roll them up in a spiral and cut in half at the center.  This will give two little rosettes to use for the rolls. 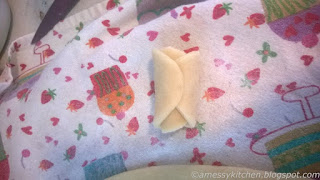 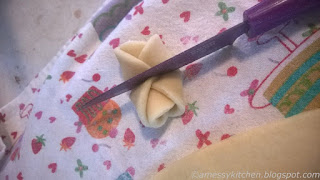 Repeat with the rest of the dough.  To make single rolls, use three rosettes in standard muffin liners, spreading out the liners to provide a gentle shape and hold them together. 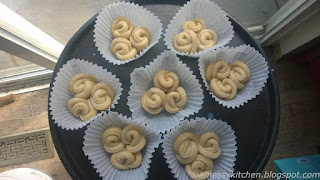 To make a more impressive and larger roll, use a lined brioche tin or, as I did, a lined or greased 4 to 5-inch springform or tart pan. 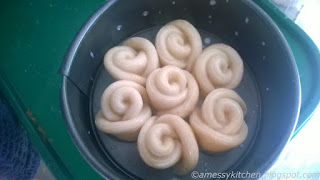 Let the rolls rise again, covered, until they are puffy and then lightly brush with whole milk.  Bake for 15-20 minutes in 350ºF oven until light golden.  Cool on a wire rack and dust with powdered sugar.  Or leave plain and use as impressive dinner rolls. 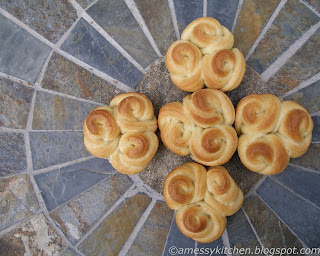 Either way, they are very tasty! 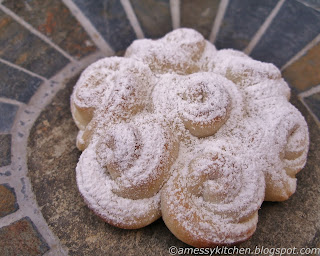