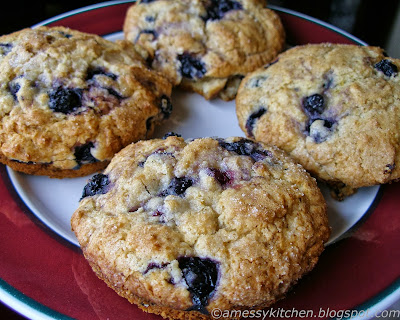 So I had intended on making these for my daughter's breakfast, but now I understand why they are called "boy bait".  I was testing a fresh one out and took the plate up to darling hubby to offer him a bite.  I never got my plate back.  They really are delicious, fluffy and very moist with a sweet crunchy top.  I made them in a muffin top pan but I expect they would work in standard muffin pans or the traditional 9" square pan as well.  And since R has now eaten one and a half huge muffins, I will have to hide the rest so she doesn't turn into a blueberry.  ☺  She has enthusiastically requested one in her lunch, so I will be finding out how well they freeze soon.  I made these with frozen blueberries straight out of the freezer.  I would say that is the way to go to avoid clumping.  Otherwise they would have to thaw completely and pat dry before tossing with flour.

Preheat oven to 350ºF.  In a stand mixer or large bowl, cream the butter, lemon zest and sugar until light and fluffy.  Add the egg and vanilla and beat until smooth.  Combine the flour, salt and baking powder in a medium bowl.  Add to butter mixture in three additions, alternating with the buttermilk.  Begin and end with flour and mix just until incorporated.  Toss the blueberries with the 2 tbsp flour and gently fold into batter.  (Batter will be stiff.)  Grease the muffin pan well with butter or coconut oil.  Divide the batter evenly among the wells.  (It will spread a bit as it bakes so it doesn't have to be perfect.)  Alternately, use a well greased 9" square pan.  Sprinkle the tops all over with the 3 tsp sugar.  Bake for 25-35 minutes (depending on whether your berries were frozen) until golden brown and centers test done with a wooden skewer.  (If you just want to make sure the center is done, turn down the oven to 325º for additional baking time.)  Cool on a wire rack for 10 minutes before serving.

(If using regular flour instead of spelt, you many want to increase to a full cup of sugar.  Spelt has a subtle sweetness to it that lets you get away with less.) 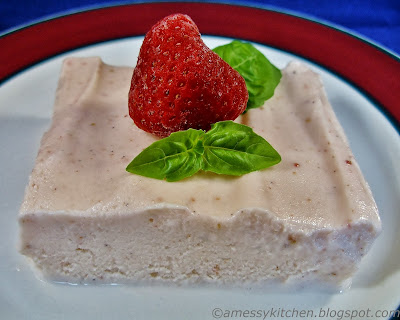 In defiance of the weather, which is currently trying to snow, I am making a bright and cheery dessert for spring!  I love strawberry lemonade and this is a great version.  I already have visions of putting this frosty treat into a springform pan with a graham crust, maybe fortified with a little whipped cream to lighten just a bit.  Mmm, summer desserts here we come.  Well, maybe in a couple more months...  In the meantime, have a little refreshing, Spring-y dessert to tide you over.  ☺  (If you can't wait until the next day, this makes a nice puckery frosty, or spike it and have a frozen strawberry lemon margarita!)

1 Qt fresh strawberries, cleaned and hulled (frozen have better flavor out of season)
½ gallon vanilla ice cream, softened (I use the Breyer's Natural Vanilla as one of the few without corn syrup)
1 cup lemon juice (fresh preferred)
¾ cup honey
1 tsp lemon zest (if you didn't have fresh lemons, don't worry about it)

Puree the strawberries (slightly thawed if using frozen), lemon juice and honey in a blender or food processor.  Keep a few strawberries to throw in at the last second if you want bigger chunks of strawberry in your dessert.  Put the softened ice cream in a large bowl or stand mixer and add the puree and lemon zest.  Mix on low speed or fold by hand until the two mixtures are blended.  Pour into a 9x13" pan and freeze overnight.  Let it thaw for about 10 minutes before serving on chilled plates.  Garnish with fresh fruit if it's available and maybe a dollop of whipped cream. 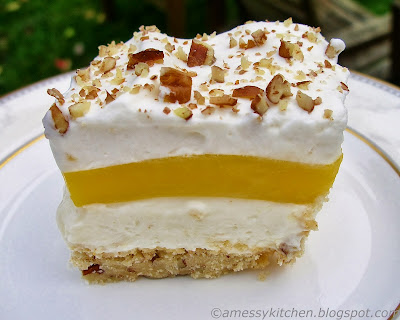 I may have mentioned once or twice that I love almost all things lemon.  This luscious dessert was inspired by one I've seen in many forms over the years, most of which use lemon pudding mix and cool whip.  It's easy and a potluck favorite.  Personally, I think boxed lemon pudding is vile.  I like my lemon to be freshly sweet and puckery, not cloying and artificial.  Add to that the fact that we don't do cool whip anymore due to allergies and hydrogenated fats, and I needed to come up with my own "scratchified" version.  What I ended up with was a rich, not too sweet and lightly lemony dessert.  There is a nice punch of lemon from the curd layer and the other creamy layers are subtly lemon flavored as well.  This is not like lemon meringue pie or a lemon bar that is really tart, but I still love how it turned out.  And darling hubby, being somewhat of a lemon wuss, likes this milder tartness very well.  ☺  Once again, using real ingredients instead of the processed stuff makes this rich and satisfying with a much smaller piece.  This is also a dessert where you can try out your favorite lemon curd or filling.  I've seen the condensed milk version and starch based lemon filling used as well as just simple curds.  Feel free to use your favorite.  You could even change that flavor to a berry filling which would be delightful and I know this is offered in a chocolate too, though I'd leave out the lemon zest in the other layers in favor of vanilla if I tried that.  (I originally used a bit more gelatin for my lemon layer, but found it did not need that much since it gave a little more firmness than I was looking for.  Still good, but I wanted it softer in the future, so I decreased a little.)  This is a great make ahead dessert that can be assembled a little at a time throughout the day.

Preheat oven to 375ºF.  In a mixing bowl, cream butter and 2 tbsp powdered sugar.  Thoroughly mix in the flour and chopped pecans.  Press into the bottom of a 9" square pan.  Bake for 15 minutes or until lightly browned.  Cool completely. 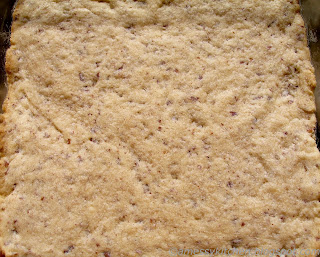 Stir together ½ cup sugar and gelatin in a small saucepan.  Blend egg yolks, water and lemon juice together with a fork.  Pour the mixture into the sugar through a fine mesh strainer.  (Takes care of any curdled egg whites in your custard.)  Cook over medium heat, stirring constantly until mixture boils.  Remove from heat and stir in lemon zest.  Set aside to cool to room temperature. 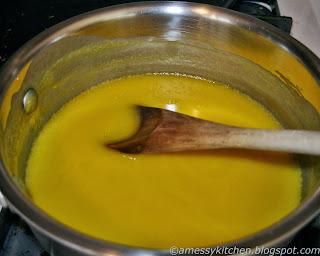 In a medium mixing bowl, blend the cream cheese and the ½ cup sugar until fully blended and no sugar crystals are left, about 2-3 minutes.  Stir in the lemon zest.  Whip the ½ cup cream until soft peaks form.  Lighten the cream cheese mixture with one dollop, then fold in the rest.  Spread on top of the pecan crust with an offset spatula as flat and even as you can get it. 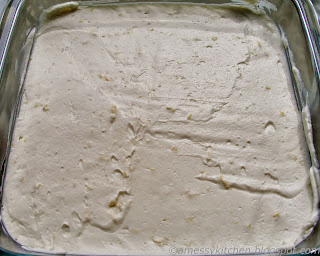 Pour the cooled lemon custard on top and chill in the refrigerator for at least 30 minutes. 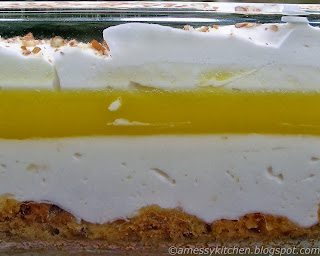 In a small pan combine gelatin and lemon juice; let stand until bloomed (thick).  Place over low heat, stirring constantly, just until the gelatin dissolves.  (You can also do this in a custard cup for 10 seconds in the microwave.)  Remove from heat and cool but do not allow it to set.  In a medium bowl, whip the 1 cup cream and ¼ cup powdered sugar until slightly thickened.  While beating on low speed, gradually add in the gelatin mixture.  Whip at high speed until thick.  Don't get it too stiff or it will be difficult to spread.  Pour/spread out the cream onto the lemon layer and sprinkle with the 2 tbsp finely chopped pecans. 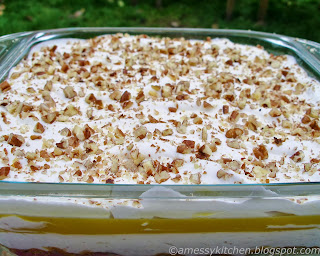 Chill for at least an hour before attempting to cut into it.
at March 08, 2012 3 comments: 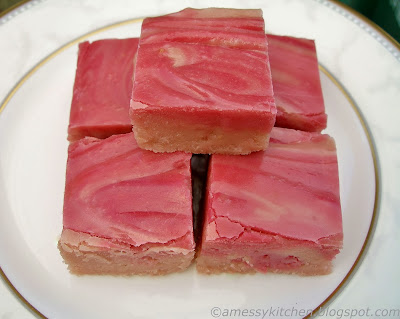 Strawberry marshmallows are wonderful in hot cocoa, but what else can you do with them besides eating them out of hand?  That question led me to this sweet confection.  Now I myself love maple fudge and penuche, but the hubby loves white chocolate.  Add a little real strawberry to the mix and you've got something pretty special.  It makes a modest amount but is so rich and sweet that a little goes a long way.  (Since I use evaporated cane sugar instead of white sugar, my candies tend to have a creamy to beige color to them.  If you use white sugar, the color will be more pastel pink and less food color will be needed.  I use the natural food colors offered by India Tree.)  As these have somewhat of a mellow creme texture to them, R of course has gone completely bonkers for them.  The hubby and S loved them in very small quantities as they are quite sweet.

I like to avoid the flavorings with propylene glycol in them, but I think there might be some strawberry extracts floating around out there with just alcohol.  If you want to bump up the strawberry flavor, you could always try adding a tiny bit.  This is a little more subtle with just the strawberries from the marshmallows.

In a heavy saucepan over medium-high heat, combine the sugar, sea salt, evaporated milk, and butter.  Stir until the sugar is melted.  Bring to a full boil and stir constantly for five minutes.  After five minutes, remove the mixture from the heat and stir in the chocolate pieces, marshmallows, and lemon extract.  Add a few drops of food color to reach a light shade of pink. Pour about three quarters of the mixture into an 8x8" pan that has been lined with aluminum foil and buttered or sprayed with non-stick cooking spray.  Add a few more drops of food color to the remaining mixture in the pan for a deeper pink and drizzle over the pan.  Swirl with a spatula and place in the refrigerator to set the fudge - about 30 minutes.  Slice into small squares and serve. 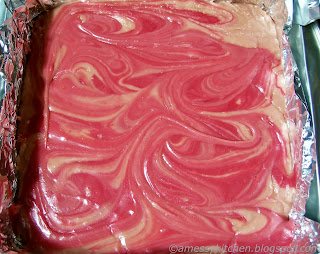