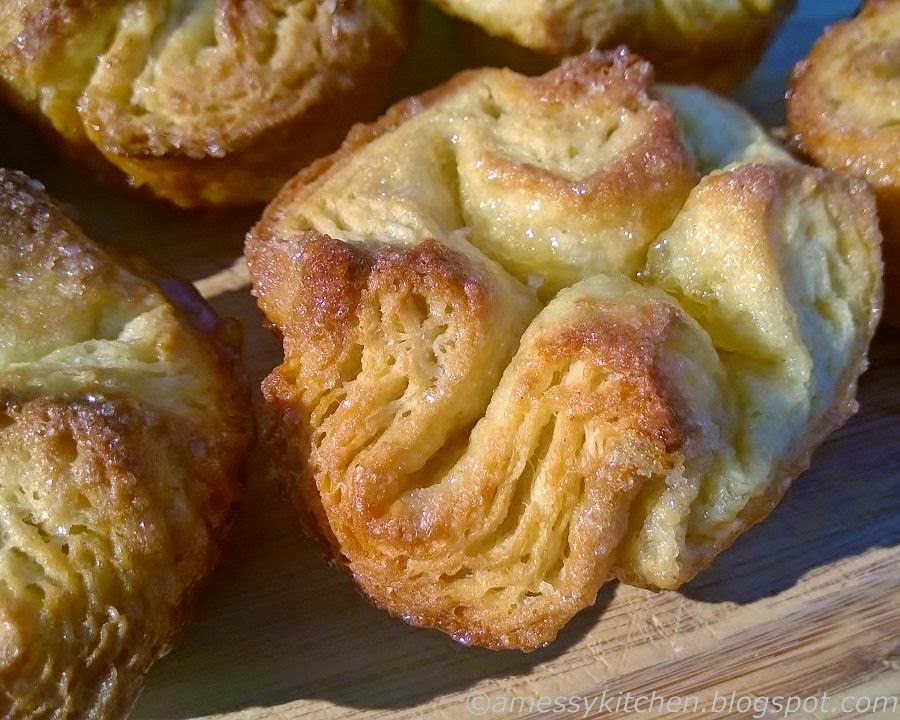 These are amazing little bites of crispy, buttery, chewy pastry goodness.  I've had Kouign amann on my radar ever since a relative emailed me a picture of one from a bakery, asking if I could make it.  It looked wonderful!  So when I saw that the Bread Baking Babes were making them for this month's challenge, I knew I had to find time to bake along as a buddy.

I had pinned a recipe and video from chefsteps about "queen" "ah-mahn" a while ago and I did make very slight adjustments to the recipe based on that and other bakery renditions I've seen.  I used mostly spelt, but added 100g of regular all purpose flour for strength.  I hoped to maintain the open flakiness that way.  I also reduced the water by 25 ml to account for the use of spelt and increased the dough butter by 10g.  Finally, I added just 15g sugar.  That was only a quarter of the sugar used in the video dough, but there was none in the BBB recipe.  I figured with all the sugar sprinkled and rolled in, not too much should be in the dough but I did want to feed the yeast a bit extra for optimal rise.  For the butter block, I did add a tiny bit of flour since I didn't use european butter and could have been concerned about moisture content.  I also added just a bit of sugar and salt as shown in the video recipe though not nearly as much as they did.  Just to really get that salted caramel flavor and crisp.  I ended up using about ½ tbsp flour, 25g sugar and 1.5g salt mixed together.  I sprinkled it on top of the butter block and bashed and folded it in as I formed the block until it was mixed and nicely pliable.

Laminating dough is a challenge, I will admit.  My croissants turned out pretty good last time, but I still had butter bleeding out on any turn over two.  The same happened here.  But they still turned out wonderful.  I highly advise putting a sheet pan under the muffin tray to catch any butter oil and sugar that boils over the edges.  Otherwise you will have a very smoky house.  Not that this has ever happened to me...  Snicker, snicker.  I think refining my laminating will help reduce that effect and get these even crispier when done.  I'm also thinking the butter block doesn't need the salt and sugar if you are rolling out on the salt/sugar mixture.  The pastries are plenty buttery and sugary and delectable as it is! 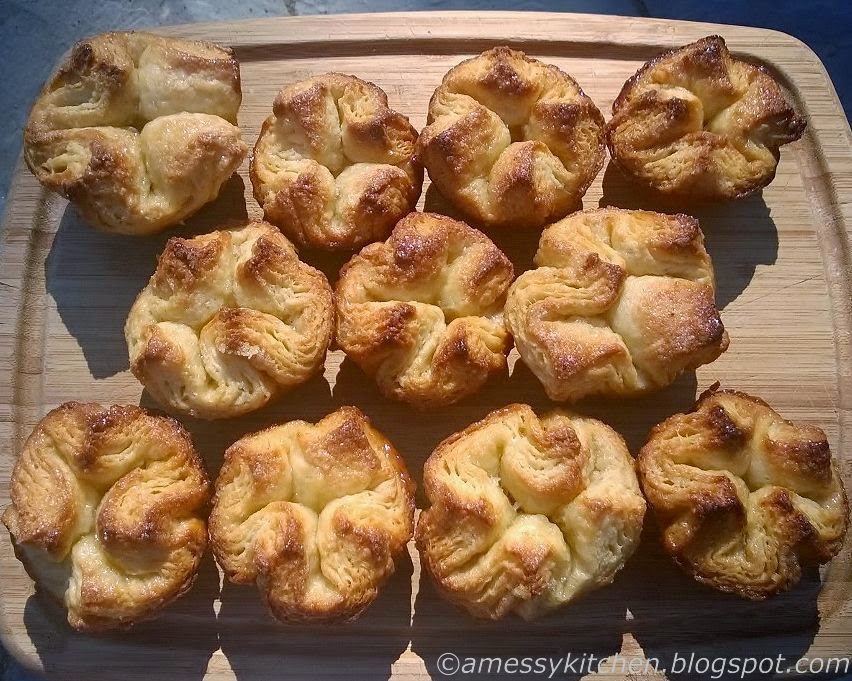 For an example of beautiful lamination and supreme flakiness, check out the host kitchen's post at Notitie Van Lien.  Here is the recipe as posted on her blog.  Next time I make these I will do a plain butter block as indicated for the BBB recipe but I will still do a sugar/salt sprinkle for the final fold.  That little bit of saltiness is sensational.

300-340 g strong plain flour (plus extra for dusting when rolling)
5 g fast-action yeast
¾ tsp salt
200 ml warm water
25 g unsalted butter, melted
250 g cold unsalted butter, in a block
100 g caster sugar for sprinkling on the dough (the final fold just before rolling it out and after it’s been rolled out - not between the other layers), plus extra for sprinkling on top

1. Put the flour (start with 300g) into the bowl of a freestanding mixer fitted with a dough hook. Add the yeast to one side of the bowl and the salt to the other. Add the water and melted butter and mix on a slow speed for two minutes, then on a medium speed for six minutes. Add a little extra flour if the dough is too sticky. The dough should be soft but not sticky (so don’t add too much).

2. Tip the dough onto a lightly floured work surface and shape into a ball. Put into a lightly oiled bowl.  Cover with cling film and leave to rise for one hour

3. Sandwich the butter between two sheets of greaseproof paper and bash with a rolling pin, then roll out to a 14 cm square. Place in the fridge to keep chilled. 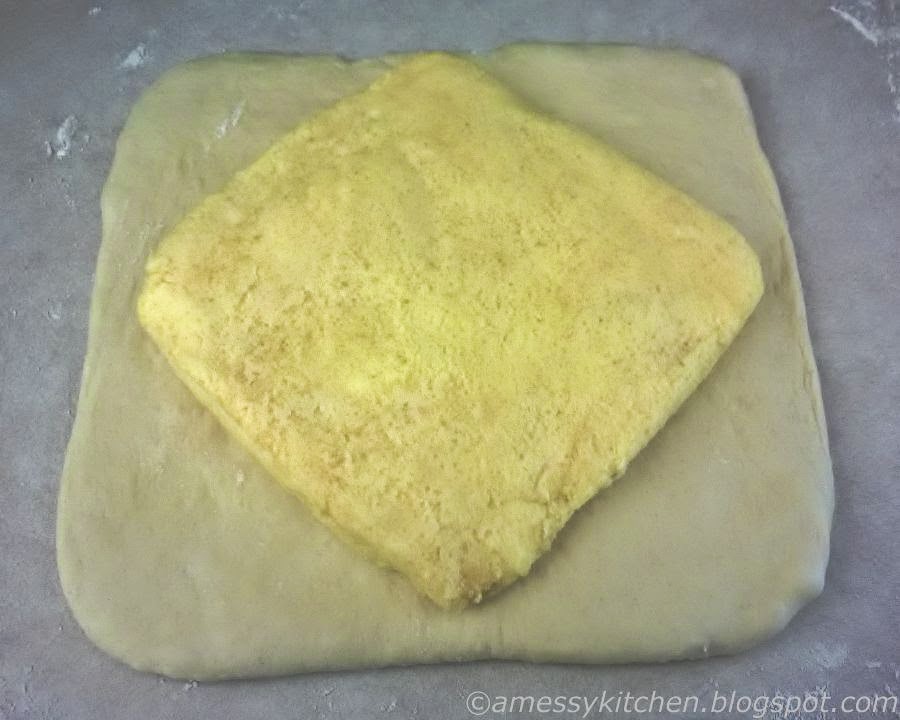 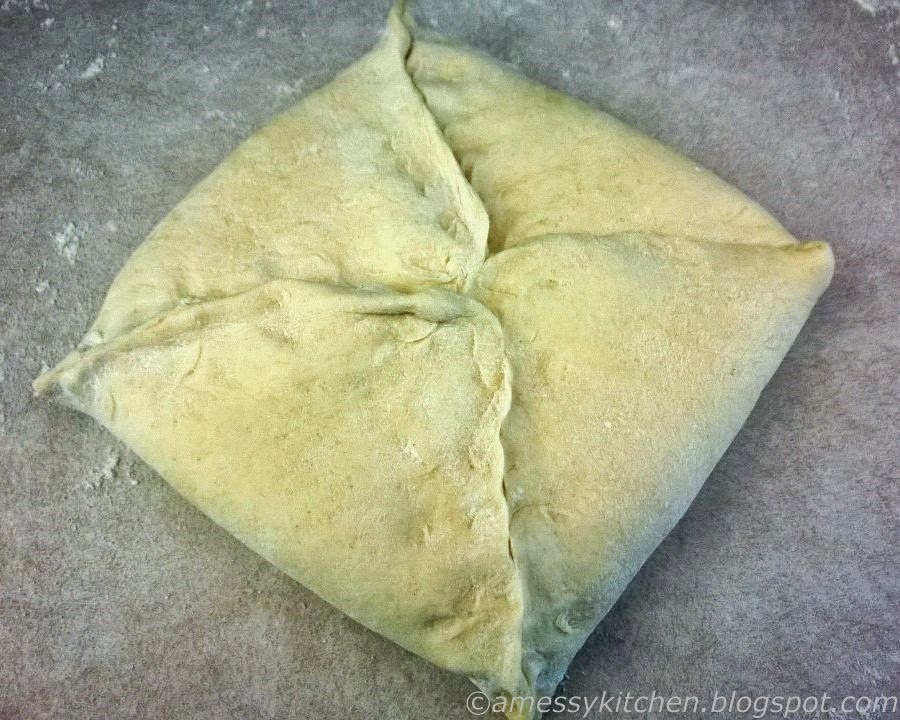 5. Roll the dough into a 45x15 cm rectangle. Fold the bottom third of dough up over the middle, then fold the top third of the dough over. You will now have a sandwich of three layers of butter and three layers of dough. Wrap in cling film and place in the fridge for 30 minutes. This completes one turn. 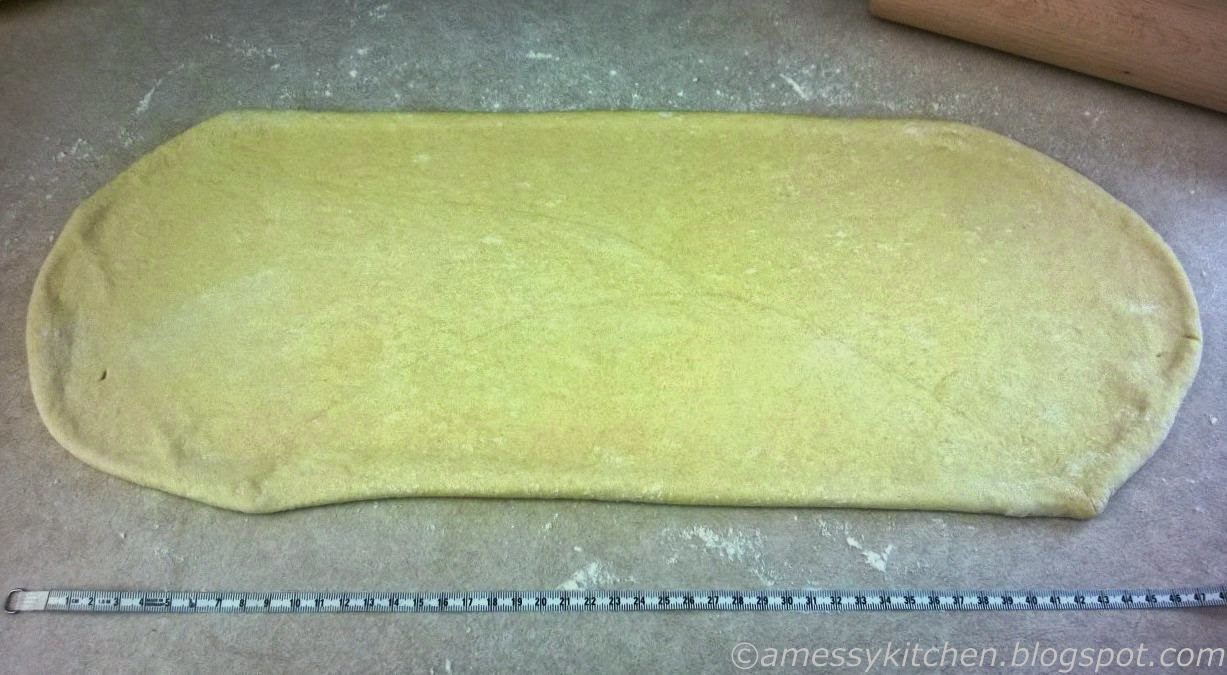 6. Repeat this process twice more, so you have completed a total of three turns, chilling the dough for 30 minutes between turns.

8. Grease a 12-cup muffin tin with butter. Gather the dough squares up by their four corners and place in the muffin tins, pulling the four corners towards the centre of the muffin tin, so that it gathers up like a four-leaf clover. Press these corners well together, they can open up when unattached to eachother. Sprinkle with caster sugar and leave to rise (room temperature), covered with a clean tea towel, for 30 minutes until slightly puffed up. 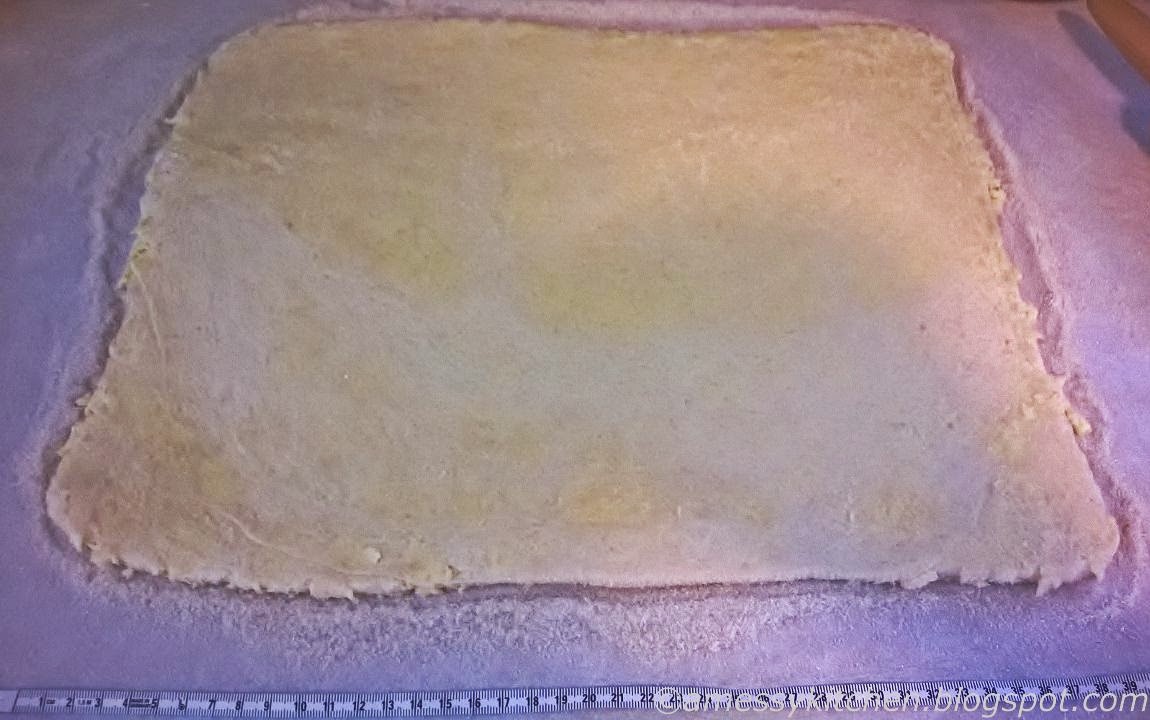 I rolled my dough out on a sugar/salt mixture.  Both sides. 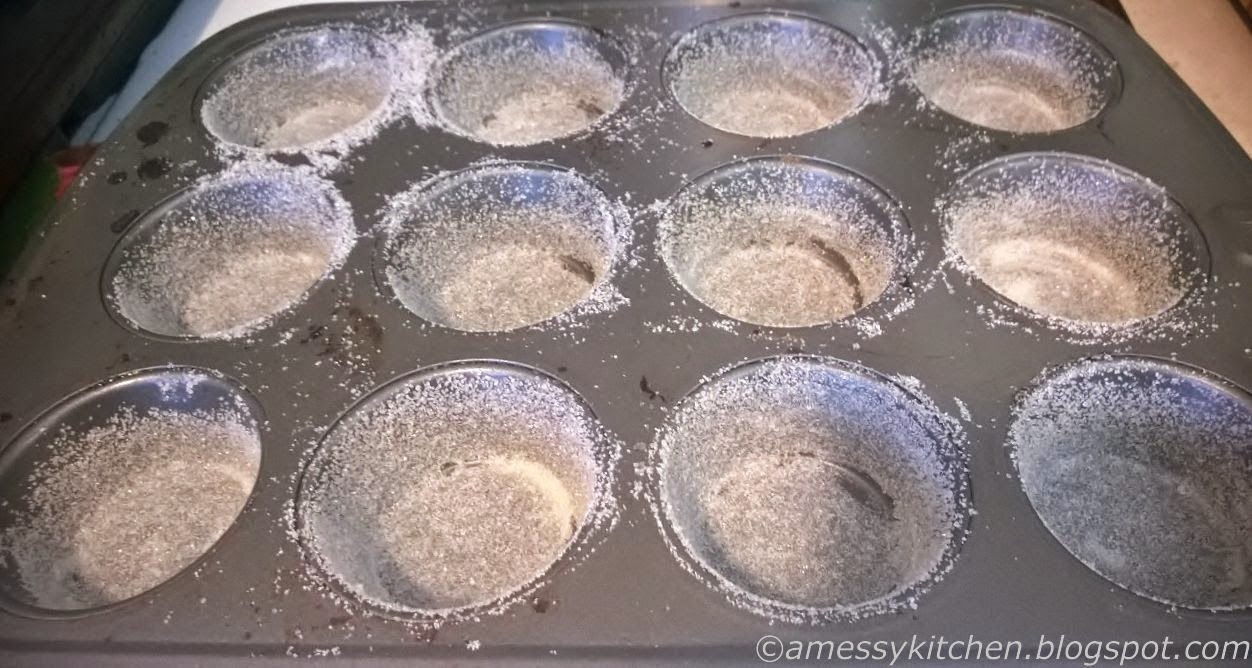 I also buttered the tin and used the sugar/salt mixture to "flour" it.

9. Preheat oven to 220ºC.  Bake the pastries for 30-40 minutes, or until golden-brown. Cover with foil halfway through if beginning to brown too much (and they will). Remove from the oven and leave to cool for a couple of minutes before turning out onto a wire rack. Be careful not to burn yourself on the caramelized sugar, but don’t leave them to cool for too long, or the caramelized sugar will harden and they will be stuck in the tin. Serve warm or cold. Warm is best!

If you don’t want to eat them all in want go (or just if you want to, but shouldn’t), bag and freeze them. Before you eat them: Defrost them and place them in a warm oven (180ºC) for about 4-6 minutes or until warm, they will crisp up again. 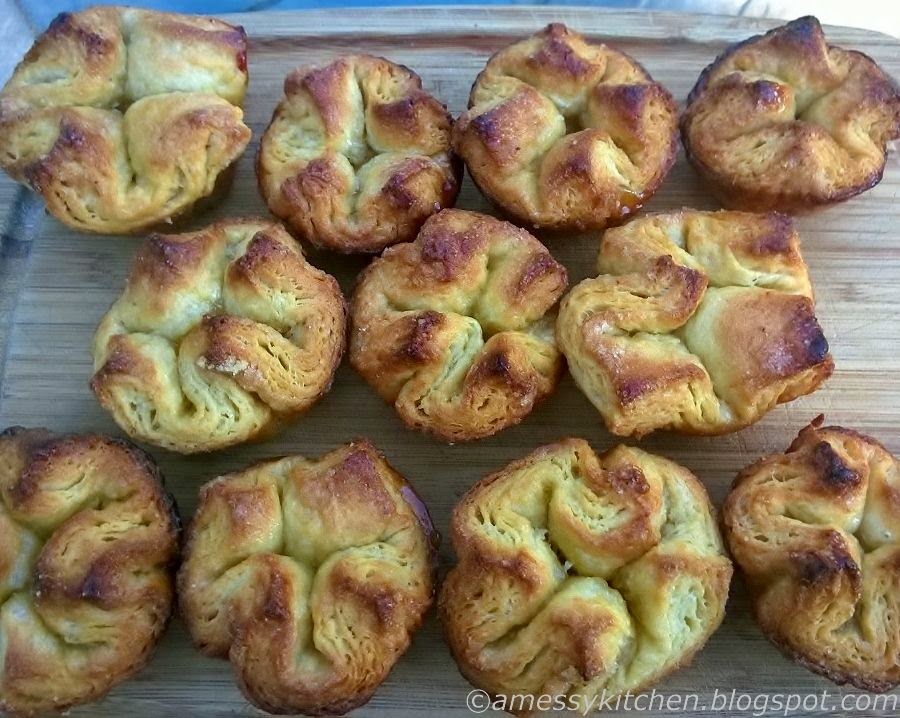 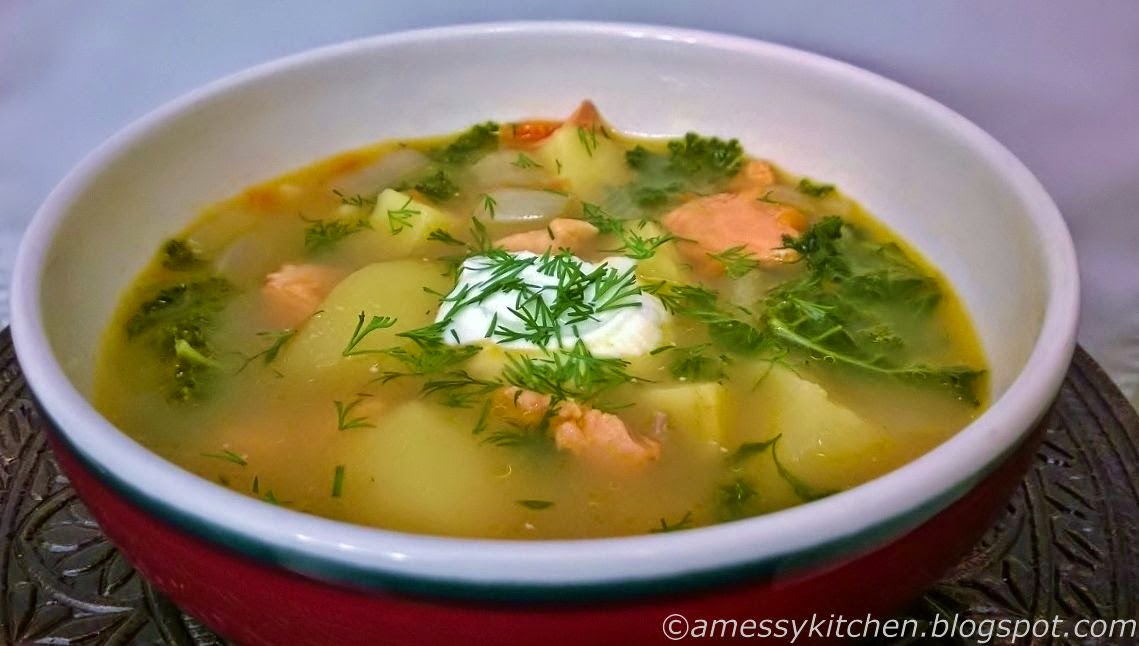 This recipe comes courtesy of a special magazine publication by Better Homes and Garden, Soups & Stews, 2014 second printing.  I couldn't find any copy of the recipe online and this turned out exceptional so I simply had to share it.  I have made a number of the recipes in the magazine and been very pleased.  This is a beautifully simple soup, not heavy but nicely warming.  Hubby commented that it would be a wonderful summer soup, he loved the addition of the kale, and he would welcome seeing the soup again any time.  The girls both asked for seconds and thirds.  I must say, the smell of onions sauteing with paprika is delightful.  We will definitely be seeing this healthful soup at our table again!

Remove skin and bones from salmon if necessary.  Cut into 1" pieces and set aside.  In a large sauce pot, melt butter over med-low heat.  Add onion and cook for 10-12 minutes until tender, stirring occasionally.  Season lightly with salt and pepper while cooking.  Increase heat and brown onions until just golden.  Stir in paprika and pepper.

Stir in chicken broth, kale, potatoes and carrot.  Bring to a boil, then reduce heat and cover.  Simmer about 10 minutes until potatoes are tender.  Add the salmon and dill.  Cook, uncovered for about 3 minutes until salmon flakes easily.